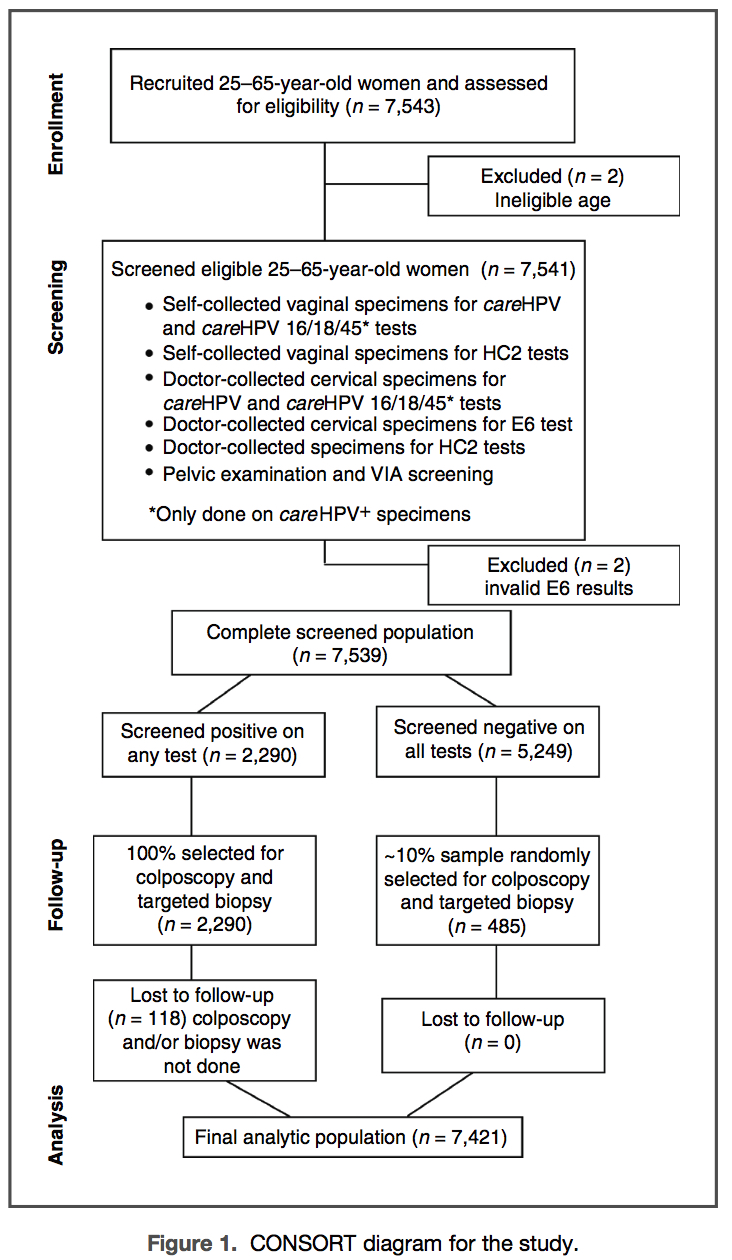 New, lower-cost tests that target high-risk human papillomavirus (HR-HPV) have been developed for cervical cancer screening in lower-resource settings but large, population-based screening studies are lacking. Women ages 25 to 65 years and living in rural China (n=7,543) self-collected a cervicovaginal specimen, had 2 cervical specimens collected by a clinician, and underwent visual inspection after acetic acid (VIA). The self- and one clinician-collected specimens underwent HR-HPV DNA testing by careHPV (QIAGEN) and Hybrid Capture 2 (HC2; QIAGEN) and the other clinician-collected specimen was tested for HPV16, 18, and 45 E6 using OncoE6 (Arbor Vita Corporation). Women who screened positive for any test and a random sample of those negative on all tests underwent colposcopic evaluation. The percent test positive was 1.8% for HPV E6 oncoprotein, between 14% and 18% for HR-HPV DNA testing, and 7.3% for VIA. The sensitivity for cervical intraepithelial neoplasia grade 3 or more severe (CIN3+; n =99) was 53.5% for OncoE6, 97.0% for both careHPV and HC2 testing of the clinician-collected specimen, 83.8% for careHPV testing and 90.9% for HC2 testing of the self-collected specimen, and 50.5% for VIA. OncoE6 had the greatest positive predictive value (PPV), at 40.8% for CIN3+, compared with the other tests, which had a PPV of less than 10%. OncoE6 tested 70.3% positive for HPV16, 18, or 45-positive CIN3+ and tested negative for all HPV16-, 18-, or 45-negative CIN3+(P < 0.0001). HPV E6 oncoprotein detection is useful for identifying women who have cervical precancer and cancer. Cancer Prev Res; 6(9); 938–48. ©2013 AACR.